The figure below illustrates the potential of our method for detecting inhomogeneity of fluorescence lifetimes among molecules in a sample solution. Our method is also applicable to a temporarily fluctuating system, in which case it would be possible to capture the equilibration dynamics between distinct states, such as different conformations of complex molecules. 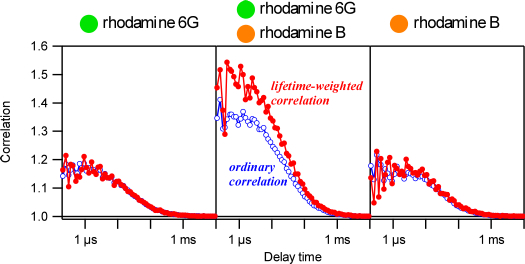 Detection of inhomogeneity by lifetime-weighted FCS

It is of particular importance in complex molecular systems to directly evaluate nontriggerable spontaneous dynamics (“asynchronous dynamics”) on an experimental basis. While other single-molecule-based spectroscopic methods are frequently applied for this purpose, FCS is particularly useful for monitoring rapid processes in the nano- to microsecond time range. Therefore, our method has potential use in dynamical studies of complex molecules in very short timescales.