Recent advances in ultrashort-pulse lasers have enabled us to generate optical pulses as short as 10 femtoseconds. By using such short pulses, we are now able to perform time-resolved molecular spectroscopy with unprecedented time resolution.
One of the unique and remarkable aspects of ultrafast spectroscopy is that we can observe vibrational coherence (nuclear wavepacket motion) directly in the time domain. An ultrashort pulse has an energy bandwidth broad enough to excite many vibrational states simultaneously and to generate their coherent superposition. The generated coherent state evolves in time and gives rise to oscillatory features in time-resolved signals that correspond to real-time nuclear motion.
Especially in reactive systems, photoexcitation generates a precursor state that is vibrationally coherent, hence, it gives us an opportunity to observe the coherent nuclear dynamics in early stages of the reaction. This vibrational coherence in reactive systems has received increasing attention due to its potential application to reaction control. Therefore, it is important to unveil the initial motion of nuclei and its relevance to the structural change of the molecule during the reaction (“reaction coordinate”).
With this idea in mind, we studied several ultrafast reactions in solution, such as the photoisomerization of cis-stilbene, the photodissociation of diphenylcyclopropenone, and the intramolecular proton transfer of 10-hydroxybenzoquinoline, by using two-color pump-probe spectroscopy [1-6].

As shown in the figure (left), 10-hydroxybenzoquinoline (10-HBQ) clearly showed oscillatory features at delay times much longer than the proton transfer time, indicating that this molecule exhibits a coherent nuclear motion during, and even after, the reaction. Referring to the results of theoretical calculations, we discussed the assignment of the coherent nuclear motion and its relevance to the ultrafast reaction [4]. 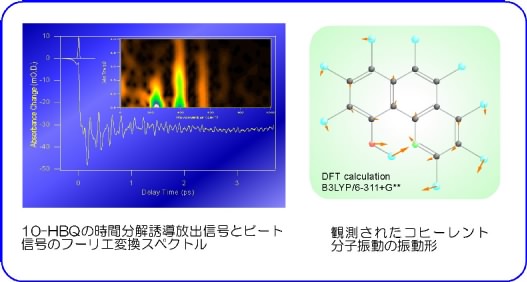 Cis-stilbene undergoes an ultrafast, cis-trans isomerization around the central C=C double bond upon UV irradiation. The transient absorption change of the initial excited state exhibits a ~220 cm-1 oscillation (left). This oscillation dephases much faster than the isomerization lifetime, which suggests that cis-stilbene starts cis-trans isomerization after the vibrational coherence is lost in the reactive S1 state [3].
For this system, we applied the wavelength-dispersion method to investigate the mechanism by which the oscillation appears. The time-resolved spectra show a wavelength-independent oscillation pattern (right), which indicates that a modulation of the transition intensity, instead of the transition frequency, is induced by the nuclear wavepacket motion. It suggests the existence of an efficient electronic-state mixing via the ~220 cm-1 motion [6].

These observations for prototypical systems have revealed the significance of coherent nuclear motion to different types of reactions [5].

Reactive potential surfaces and nuclear wavepacket motions for (a) diphenylcyclopropenone, (b) 10-hydroxybenzoquinoline, and (c) cis-stilbene.